Discussions on blockchain technologies have been around for several years. One of the topics currently dominating the news is “non-fungible tokens” (NFTs). These can be used to tokenize unique items like artwork or music. A comparably new development is the tokenization of short messages (“tweets”) from Twitter. The market develops rapidly and tweet NFTs become a considerable subject for investment and speculation.

Non-fungible tokens are currently extremely present in the news around blockchain technologies. Not only art but also tweets from the social media platform Twitter are now converted into NFTs and sold on dedicated marketplaces. This article will provide a brief overview of the phenomenon of tweet NFTs and the current market situation.

The first thing to understand is the value behind a tokenized tweet. Tweet NFTs work like tokenized art: based on the perceived intrinsic value of the tokenized object. So tweets are considered as a piece of art or history, which makes intuitive sense because: Wouldn’t it be awesome to own the most popular tweet by Elon Musk — or the first one about Bitcoin? Nevertheless, serious doubts remain about NFTs being a real investment like traditional artwork or just a hype-based toy for crypto enthusiasts.

Before answering all these questions, we need to understand the general process behind a tweet NFT transaction. Currently, there are several published smart contracts that offer creating a NFT from a Twitter tweet. For now, we will focus on the one that has gained the most attention and momentum, namely the solution behind the v.cent.co platform. After connecting a Metamask wallet and authenticating with your Twitter account, users can make offers on all tweets available on Twitter using an offer system as shown in Figure 1. But only if the creator of the tweet accepts the offer, the NFT will be sold. As soon as an offer is accepted, the NFT is sold to the bidder who pays out of his/her Metamask Ether wallet. The effect of this sale is that the buyer of the tweet will be the new owner of the NFT on the blockchain and the agreed purchase price is transferred to the wallet of the seller. But there are also secondary transactions, which do not include the former tweet creator anymore. The process is the same as the one described above but now the current owner needs to accept the offer and will receive the purchase price. There is one difference, which is especially interesting for successful tweet creators: The creator receives a fee on secondary sales of his/her tweet NFT. All of the transactions are executed on-chain and therefore the current ownership of the NFT is always traceable and publicly available. On a more technical level, the NFTs themselves are stored on the Polygon sidechain, while the Ether transactions are handled by the Ethereum chain. 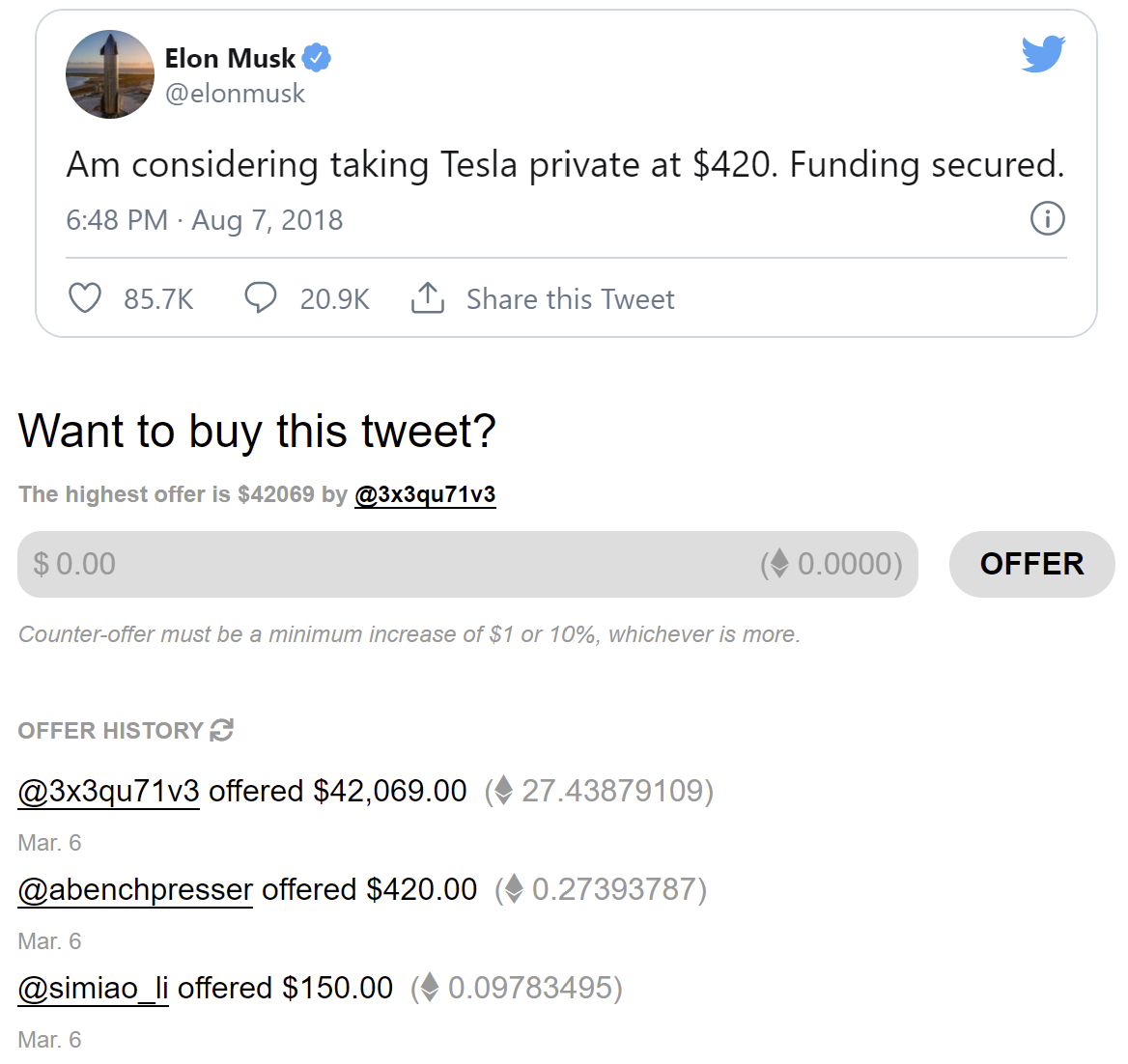 As described earlier, there are two major groups involved in tweet NFT transactions: the actual tweet creators and other market participants buying and selling NFTs, whose interactions are illustrated in Figure 2. For the creators, the value of this technology is obvious: they can now easily monetize their tweets, which they have created in the past or will create in the future. Other market participants can be divided into two more detailed groups again, namely the final buyers and traders or investors. Final buyers are fans or enthusiasts, which are driving the value of a tweet NFT because they want to own and keep a specific tweet. Traders and investors use this marketplace to realize financial profits by buying potentially valuable tweet NFTs and selling them with a profit.

The prevalent hype around NFTs in general and especially about tweet NFTs is likely to boost the demand in this market. And also many creators will become aware of the possibility to monetize their tweets. So we expect the market to grow dynamically in the near future. Speculators looking for a large profit will influence the market developments significantly. This also gives rise to a group of creators trying to construct potentially valuable tweets to generate profits as well. Nevertheless, the long-term relevance of this concept is still not certain and will crystallize throughout the upcoming months.

Furthermore, a special event on March 22, 2021 was the first sale of a tweet by Jack Dorsey, co-founder and CEO of Twitter. Figure 3 shows the famous first tweet of Jack. This tweet has been sold for 1,630 Ether (valued at $2.9m at the time of purchase) and this transaction spurred the dynamics in the tweet NFT market. Following this, many new market participants joined and the number of sales and offers increased constantly. Through events like this, the market will be boosted and tweet NFTs will definitely be an exciting topic throughout 2021. To get deeper insights on the current market dynamics, stay tuned for upcoming tweet NFT market overviews.

As mentioned before, v.cent.co is not the only smart contract that allows the creation of tweet NFTs. So, does it mean that we can create several NFTs for the same tweet? Short answer: yes. NFTs only guarantee uniqueness within the same contract. Therefore, it is possible to mint (i.e., creation of NFTs) different NFTs referring to the same tweet. For example, tokenizedtweets.com is another smart contract, where users can mint NFTs by mentioning @tokenizedtweets as a reply to the desired tweet. If the tweet has not been tokenized on this specific smart contract before, a Twitter bot will automatically create a NFT and store it in the wallet connected to the user, who published the reply. Let’s take a closer look at Jack’s tweet, which was sold for $2.9m on v.cent.co. As Figure 4 shows, this tweet was already double minted on tokenizedtweets.com. Would it be possible to sell this tweet again for $2.9m? Theoretically yes, but it’s quite unrealistic. The actual value of NFTs is solely dependent on the market participants’ belief in the value. Why did the market believe in v.cent.co? Difficult to determine with certainty, but v.cent.co requires a Twitter authentication of the tweet creator, before it can be sold. This gives the transaction more credibility and hinders the creator to sell it again on a different platform, without risking his or her social media integrity. Nevertheless, the double minting issue of tweet NFTs will remain and only the market participants can decide which smart contract will prevail. 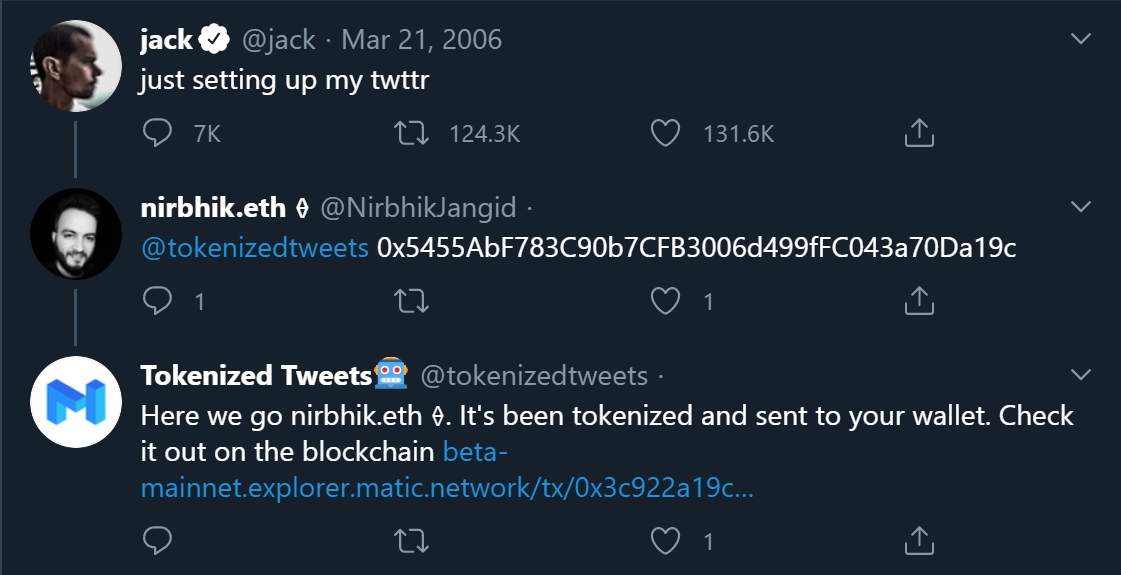 Jan Steegmüller has conducted widespread projects around DLT and blockchain. Currently, he works on a NFT project for BFG. You can contact him via mail (jan.steegmueller@blockchain-founders.io) or via LinkedIn.

Christian Flasshoff has collected experiences in consulting and banking before breaking into the startup sphere. During his career, he has collected professional experience in the blockchain venture capital scene and other blockchain-related subjects. He enjoys solving problems with data science, writing code and developing technical solutions. You can contact him via LinkedIn.

Prof. Dr. Philipp Sandner has founded the Frankfurt School Blockchain Center (FSBC). In 2018 and in 2019, he was ranked as one of the “top 30” economists by the Frankfurter Allgemeine Zeitung (FAZ), a major newspaper in Germany. Further, he belonged to the “Top 40 under 40” — a ranking by the German business magazine Capital. Since 2017, he is member of the FinTech Council of the Federal Ministry of Finance in Germany. You can contact him via LinkedIn or follow him on Twitter (@philippsandner).

We are a Liechtenstein-based company builder and venture capital investor. We believe that blockchain is the biggest investment opportunity over the next decades. Our DNA is composed of academic and regulatory drivers of the blockchain economy as well as ambitious entrepreneurs and venture capitalists.

As company builders, we turn blockchain ideas into companies after having vetted them thoroughly with our entrepreneurs in residence and advisors.

As venture capital investors, we finance founder teams in the pre-seed/seed stage in the traditional venture capital way coupled with our understanding and active commitment as co-founders.

Our location in Liechtenstein allows us to take advantage of the industry-leading Blockchain Act, which we believe will inspire European-wide legislation in the coming years.

These Stories on blockchain

Drop us a line